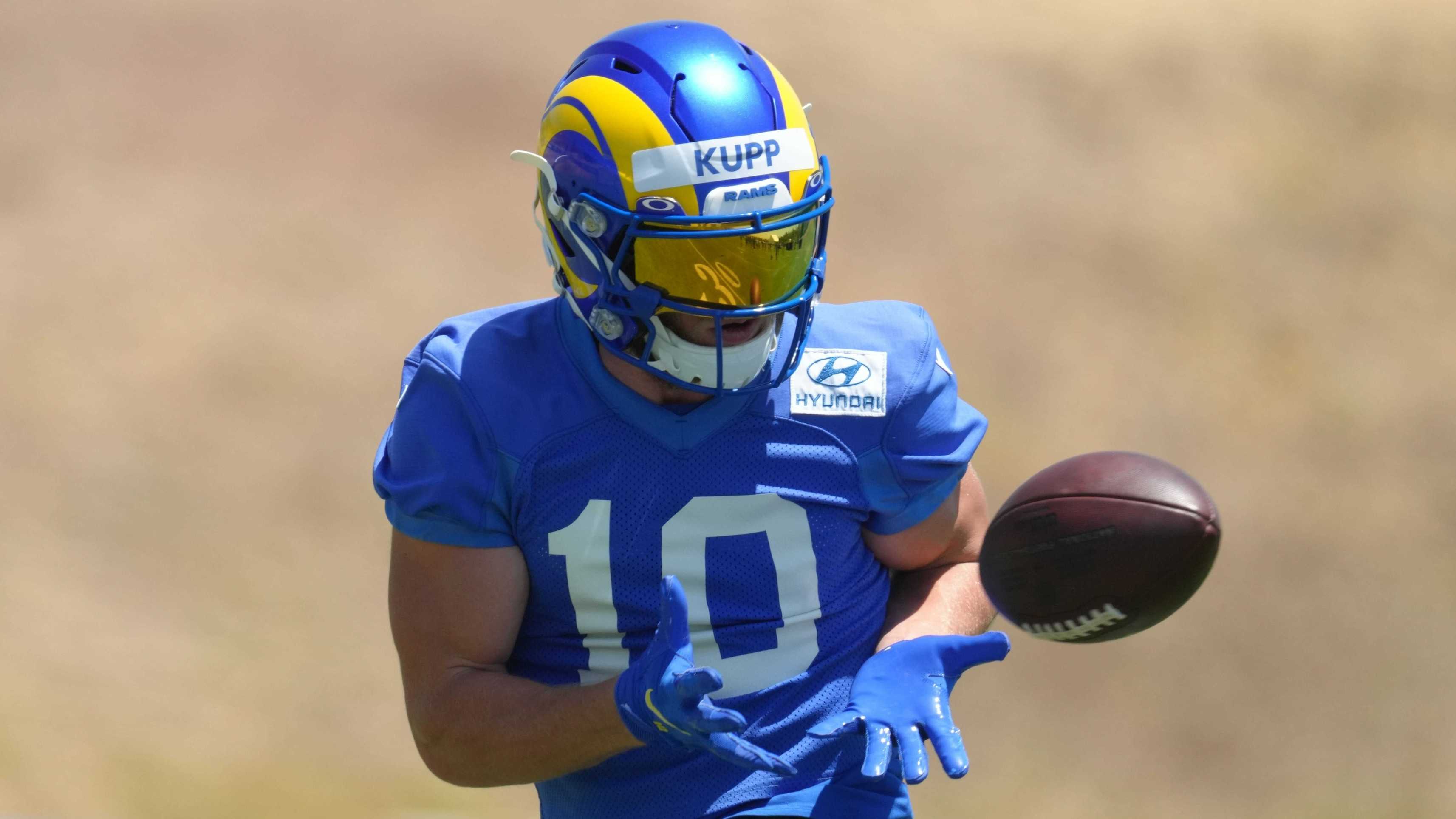 With the 2022 NFL season right around the corner, bettors can focus on wagers beyond just regular NFL odds ahead of regular season games. Looking at player prop bets stands as an increasingly popular way to make NFL bets. These wagers bring added entertainment value as well as other betting avenues.

NFL player prop bets stand outside of the final scoreboard, focusing instead on a player’s individual performance—be it in a single game or season-long. The PropShop app is the easiest way to bet on your favorite players. This sports betting app provides real-time odds comparison, live bet tracking, player props, picks, scores, and trends.

The players in the running to lead these statistical categories remain integral parts of teams with some of the best NFL Futures odds heading into the season. Here’s a look at the early odds for 2022 NFL the most regular season receiving yards.

NFL Player Props often come down to availability. 20 of the last 22 receiving yards leaders played each of their team’s games that season. Only Antonio Brown (14 games in 2017) and Josh Gordon (14 games in 2013) completed the task in less than a full season.

Only three wideouts head into training camp with better than 10/1 odds to lead the league in receiving yards next season: Cooper Kupp, Justin Jefferson, and Ja’Marr Chase.

Kupp enters 2022 coming of a Super Bowl LVI MVP award after leading the league in catches, receiving yards, and touchdowns last season. He remains a slight favorite to win AP Offensive Player of the Year for the second year in a row.

Kupp remains an integral part of an LA Rams passing attack that finished fifth in the NFL in passing yards last season. He emerged as Matthew Stafford’s favorite and most reliable receiver. The Rams traded away Robert Woods this offseason and replaced him with Allen Robinson II, who’s coming off an injury-plagued 2021 campaign.

The Vikings’ Justin Jefferson stands either even with or just behind Kupp in the odds race for most regular season receiving yards. The third-year wideout has compiled 3,016 receiving yards through his first two seasons and sees a new, offensive-minded head coach taking over in Minnesota. Incidentally, the new coach, Kevin O’Connell, spent the last two seasons as the offensive coordinator for the LA Rams.

Jefferson finished 2021 with 27 receptions of 20 yards or more, second-most in the league behind Kupp (30). He’s become a favorite target for Vikings quarterback Kirk Cousins, averaging 8.8 targets per game through his first two seasons.

Cincinnati’s second-year wideout, Ja’Marr Chase, stands as the only other receiver to see better than 10/1 odds for most regular season receiving yards. Most sportsbooks, however, list him at +1100 or longer. Chase established himself as one of the NFL’s best deep threats, finishing one behind the league lead for most catches of 20 yards or more (8). He finished third among receivers in YAC (yards after the catch).

The worry with backing Chase entering his second season would be competition for targets. Bengals quarterback Joe Burrow has options beyond Chase in Tee Higgins and Tyler Boyd, as well as Joe Mixon out of the backfield and newly signed Hayden Hurst at tight end.

The second tier of receiving candidates to consider for most regular season receiving yards include two receivers that have changed teams and a tight end.

Davante Adams went from Green Bay to Las Vegas this offseason, signing a then-record-breaking contract extension with the Raiders. He joins his former Fresno State teammate Derek Carr and looks to build upon his successes with the Packers. Adams averaged 108 catches and 1,327.5 yards over the last four seasons, earning Pro Bowl berths each year.

Most sportsbooks slot Adams either at +1100 or +1200 for this statistical distinction. The worry backing Adams here isn’t an unfamiliarity with a new quarterback, but going to a team with multiple targets in the passing game. The Raiders have Hunter Renfrow and Darren Waller as outlets for Carr beyond Adams.

Tyreek Hill, meanwhile, went from Kansas City to Miami in a similarly blockbuster trade this offseason. Hill inked a then-record-breaking contract extension of his own with the Dolphins, and immediately got to work with establishing chemistry with his new quarterback, Tua Tagovailoa.

Hill sees most sportsbooks listing him between +1400 and +2000 odds to lead the league in receiving. One of the fastest players in the NFL, Hill should be a focal point in new Dolphins head coach Mike McDaniel’s offense. But backing Hill faces a similar drawback to Adams. Hill will share targets with Jaylen Waddle, Mike Gesicki, and Cedrick Wilson in Miami.

No tight end has ever led the NFL in receiving. Kelce finished second in 2020 with 1,416 yards, which fell 119 yards short of Stefon Diggs’ total (1,535). Kellen Winslow came the closest to leading the league in receiving as a tight end when he finished the 1980 season just 50 yards behind the NFL leader.

Longshots to Consider for Most Regular Season Receiving Yards

Cowboys receiver CeeDee Lamb could be a name to consider for this NFL player props bet because he’s clearly the No. 1 target in Dallas these days. Following the losses of Amari Cooper and Cedrick Wilson, Lamb could be in for a stellar 2022 season in what will be his third year in the NFL. He finished over 1,000 yards for the first time and finished tied for the sixth-most receptions of 20 yards or more (20).

Baltimore tight end Mark Andrews sees his odds to finish with the most regular season receiving yards range between +2000 (DraftKings) and +4000 (Caesars). He should be the top target for Ravens quarterback Lamar Jackson next season after finishing sixth in receiving yards last year (1,361). Andrews led all tight ends and finished tied for the sixth-most receptions of 20 yards or more (20) overall. His 158 targets led all tight ends as well, and slotted tied for eighth overall.

An extreme longshot to consider a flyer with might be Hill’s replacement in Kansas City, JuJu Smith-Schuster. PointsBet provides the longest odds for Smith-Schuster at +10000, while most other sportsbooks list him somewhere between +4000 and +7500. His best season came in 2018, when he finished fifth in the NFL in receiving yards (1,426). COMMANDERS (-4) over Falcons After opening up 1-4, Washington has won five of their last six games and the Commanders are 5-0-1 ATS in that span.  ... How the Rams Can Upset the Chiefs

Week 12 Upset Alert Rams (+14.5) vs. Chiefs The biggest underdog of the week is a surprising one. The defending champion Los Angeles Rams come in as... I do my best to be a “journey over destination” guy, so believe me, I don’t want to skip right over all the good times on the calendar we’re just now ...